The term double helix describes the shape of our hereditary molecule, DNA. The DNA is made up of two strands twisted around each other that are connected by hydrogen bonds. The nucleotides are the monomeric unit of DNA and the language of the genetic code.

The double-helical structure of DNA was first described by James Watson and Francis Crick in the 1950s. The research is considered one of the most significant findings in biology.

However, there are some controversies also with the story of the discovery of the DNA such as the scientists do not recognize the contributions of others, namely Rosalind Franklin.

An Overview of the DNA Double Helix

The nucleotides are the monomeric units that form DNA by repeating units therefore it is also called a polynucleotide. It has three major components: 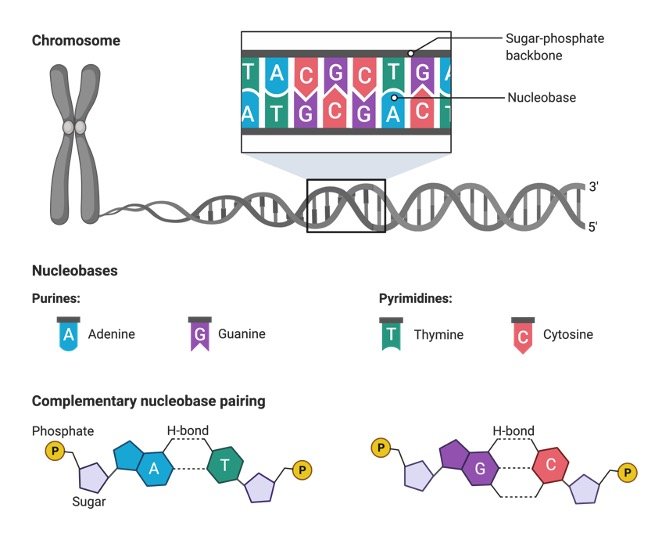 The phosphodiester bond is formed by the 4th carbon of deoxyribose sugar and the phosphate group of the nitrogenous base. It forms the sugar-phosphate backbone of the strand of the DNA. 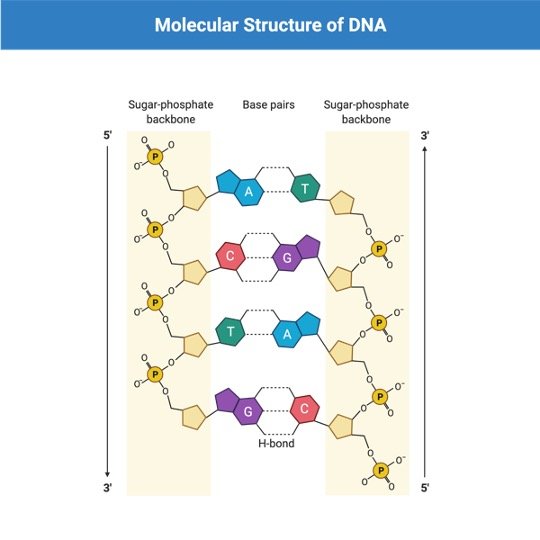 Adenine and guanine are known as purines, whereas thymine and cytosine are pyrimidines. The genetic code is the combination of these four bases that contain all the hereditary information and instructions to build and run an entire organism.

The nitrogenous base always pairs with its complementary strand. The strands wrap around one another and form the double-helical structure of DNA.

Discovery of the Double Helix Structure of DNA

In the field of biology, the discovery of the structure of DNA is one of the most significant events. It was first discovered by biologist James Watson and physicist Francis Crick in the 1950s. Both the scientists along with Maurice Wilkins were awarded by Nobel Prize for their research.

Wilkins has also an important role in the research thus his biography is also titled, “The Third Man of the Double Helix”. A lot of research had already been carried out by scientists on the composition of DNA before the publication of the double helix structure.

For example, Chargaff’s rules about the ratio of purines and pyrimidines were already discovered. Watson and Crick use all the evidence as well as X-ray crystallography data collected by Rosalind Franklin to derive their model. They carefully construct a series of cardboard models and finally form a structure that made sense. Thus, they proposed a model that was considered accurate for several decades.

After completing the research Crick announced in their local pub in Cambridge that he and Watson had discovered “the secret to life.” To commemorate the occasion, the pub named The Eagle erected a plaque, which was once modified by a member of the public. He added the name of Rosalind Franklin to the plaque and recognize his important role in the discovery.

Watson/Crick model of the DNA double helix has some important features including:

Helix Directionality: The DNA molecule is made up of two strands that form a helix by twisting around each other. The helix turns once every ten nucleotides. Almost always the helix turns in a right-handed direction. The DNA strands occur in the outside of the helix, and the nitrogenous bases occur at the core of the helix.

Complementary Base Pairing: The hydrogen bonding between the nucleotides always occurs in a particular manner. For example, adenine always pairs up with thymine, and guanine pairs with cytosine. The guanine and cytosine are connected with three hydrogen bonds whereas adenine and thymine have two hydrogen bonds. Therefore, these strands are called complementary to each other.

Genetic Code: All the organisms have a different sequence of nucleotides. Therefore the genetic information carried out by these nucleotides is also unique in each organism. Organisms propagate the sequence of DNA among generations, therefore, for the continuation of life, the DNA sequence is essential.

Antiparallel Orientation: Both strands of DNA are antiparallel to each other, which means that one strand ends on a phosphate group at the end of a particular molecule. And the other strand ends on a hydroxyl group. The phosphate group is attached to the 5th carbon thus it is called 5’ whereas the OH group is attached to the third carbon and is known as 3’.

Major and Minor Grooves: The double helix structure of DNA contains a backbone of the two strands, which is closer together on one side of the helix than the other. The major groove forms when they are closer whereas when they are apart from each other, they form a minor groove. These sides have important functions. Certain proteins that need to interact with nucleotides, such as transcription factors or DNA replication enzymes, prefer to bind to the major groove of the DNA. However other proteins interact with the minor groove and do not require sequence-specificity.

The Unwinding Enzyme: The DNA is replicated or copied by the cell to pass it on to the next generation. The replication needs unwinding or unzipping of the double helix structure so that the nucleotide sequences can be replicated. An enzyme, helicase is used for unzipping. Helicase breaks the hydrogen bonds between the paired nucleotides and remodels the structure of DNA. The enzyme plays a significant role in DNA damage repair and the process of transcription.

Alternative DNA structures: B-DNA, or Watson and Crick model is the most common structure of DNA. However, two other much rarer confirmations of DNA are also present in nature Z-DNA and A-DNA. The structure of A-DNA is more similar to B-DNA whereas Z-DNA forms a left-handed helix and also does not show many differences between major and minor grooves.