The word epidermis can be broken into two parts and it is “epi” which means top most and derma means skin. Thus, epidermis is outermost layer of skin, which acts as the natural barrier and is seen in vertebrates and plants. Epidermis might comprise of various layers in animals and a single layer in plants.

In the integumentary system, in humans, the largest which occupies the outer surface of body is the skin. Skin acts as a barrier and protects from chemical, radiation, water loss, bacterial and fungal opportunistic organism. 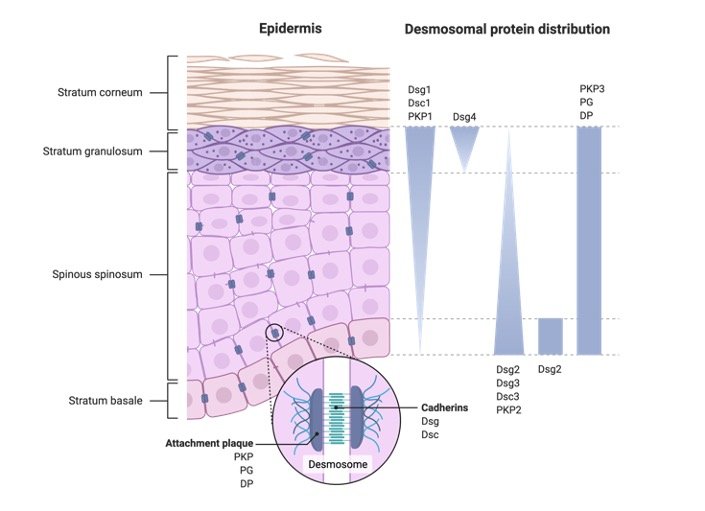 It maintains temperature, provides sensation and insulation. There are three layers in humans and animals and they are epidermis, dermis and hypodermis. The basic function of epidermis is to protect the sensitive skin layers. 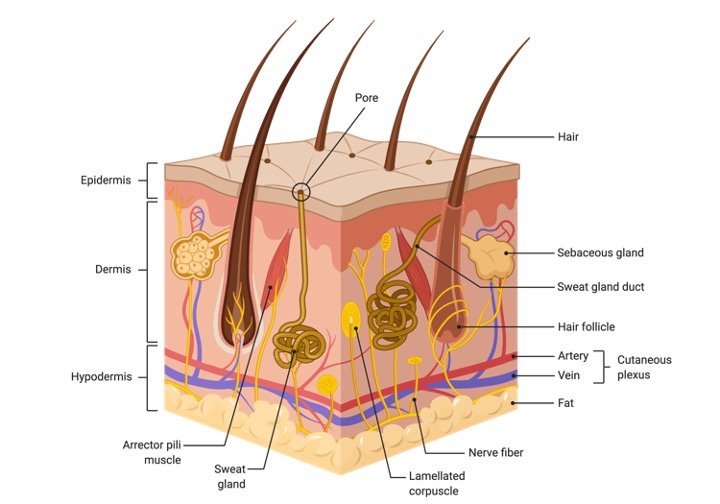 The epidermis, dermis and hypodermis are the three layers of skin. Epidermis is made from keratinized stratified squamous epithelium, where squamous are thin in structure and possess scales, whereas stratified consist of a thick layer.

The epidermal cell’s major element is the keratinocytes which results in the keratin protein generation, which is found in nail, hair, skin and feathers, forming the outer covering.

The epidermis obtains nutrients and oxygen from blood capillaries via diffusion and thus aren’t in any proximity to blood stream. The number of epidermis layer formed is dependent on the its position where 4 layers forms a thin layer of skin and five layers forms a thick layer.

Skin without hair, comprises of another layer called stratum lucidum and is the thickest, which is seen on the palm and the bottom of our feet.

Corneocytes produces defensins which are peptide molecules which combats bacteria, virus and fungi. The keratinocyte cycle lasts from 24-45 days starting from its production to the time its worn-off.

It is a thick skin layer made from 2-3 cells. Due to the unavailability of nutrients and oxygen, dead keratinocytes are found. Skin without hair, comprises of another layer called stratum lucidum and is the thickest, which is seen on the palm and the bottom of our feet.

Its thickness is 3-5 cells and are diamond in shape, but uniform, where keratinocytes generates huge amount of keratohyalin and keratin. Within the keratohyalin granules, keratohyalin gets percolated and captivate the keratin filaments resulting in the formation of a intracellular matrix.

Stratum granulosum comprises of lamellar bodies which consist of organelles that contain proteins, enzymes, glycolipids which will be liberated on the cell surface. Thus, resulting in the cells to remain in contact with the other and are coated waterproof so that water is squandered.

This thus inhibits the movement of nutrients, resulting in the superficial stratum granulosum death due to lack of nuclei and look like as if they are crushed and are depressed.

Stratum spinosum is located above the stratum basale, which is the prickle layer. The shape is polyhedral with a thickness of 8-10 cells. The cells are glued to the other cells via desmosomes. When observed under microscope the appear as spikes as the voids between the desmosomes contracts, however they do not appear like these in actual.

Pliability, support and stretchability are the functions of desmosomes. As keratinocytes start to form keratin protein, the water is regulated within the cell by the protein. Keratinocytes possess tonofibrils which are intermediate filaments of keratin, which are present at every desmosome.

The function of these tonofibrils is to provide support and hold the structure. Immune system’s dendritic cells are present in this layer. Dendritic cell when found in epidermis are called as Langerhans cells and reside in close proximity to the keratinocytes and are present in the stratum granulosum layer as well.

The foreign particle is identified by the langerhans cells and transport to the lymph nodes triggering a response. With new keratinocytes being generated, the older ones are moved to the other layer, the stratum granulosum.

It’s the deepest layer and is also called as the stratum germinativum. The shape of cells are columnar and cuboidal and separates epidermis and dermis from the basement membrane. There are two types of cell in stratum basale the keratinocytes and the melanocytes.

However, another type of cell is Merkel cell which is present in very small amount. In this layer the keratinocytes are found which replaces the lost skin cells on the surface. Through mitosis millions of cells are produced every day in the stratum basale.

As this is the deepest and is in the vicinity of capillaries, thus through diffusion it can access nutrients and oxygen and due to that mitosis can take place. Thus, old cells are replenished by newer one’s and the old cells move to the upper layers and their composition and appearance as well changes.

The epidermis is held by the keratinocytes. Another type of cells are melanocytes which produces melanin and confer skin and hair color.

Friedrich Merkel identified the Merkel cell, which are present on top of the basement membrane and are epithelial cells. With the interaction of the nerves to the membrane, they can sense touch as well as light and are found where senses are engaged like the tips of finger, lips and others. Their connected to membranes by desmosome multiprotein complex.

Desmosomes and hemidesmosomes are the one’s involved to bound basement membrane to stratum basale, thus resulting in strong bonding and providing rigidity and firmness to tissues.

Various functions of epidermis are as follows:

The cells responsible for touch and sensation are the Merkel cells. Friedrich Merkel identified the Merkel cell, which are present on top of the basement membrane and are epithelial cells. With the interaction of the nerves to the membrane, they can sense touch as well as light and are found where senses are engaged like the tips of finger, lips and others.

They are also known as mechanoreceptors or neuroendocrine cells are present in clusters and are named touch domes. Nerve endings exist to the epidermis help to carry out sensory functions like touch, pain, cola and heat.

Vitamin D is manufactured from stratum granulosum and stratum spinosum. The conversion of dehydrocholesterol to vitamin D in the presence of sunlight’s UV light takes place in the keratinocytes, where vitamin D is transformed to its active form by the enzymes and the receptors of vitamin D.

the stimulation from vitamin D receptor results in production of keratinocytes from stratum basale which undergoes differentiation and then travels to various epidermis layers.

A type of exocrine gland is the sebaceous gland which produces sebum which through ducts deposits near hair follicle, which furthers covers the epidermis thus serving as a barrier and preventing loss of water. On the hairy locations sebaceous glands are found. Maintaining temperature and water loss is a function of epidermis.

Another glands which react on the basis of body temperature are sweat glands, which are present at the bottom of the feet and on the palms. They liberte electrolytes as well as water which further moves to epidermis and maintains the temperature through sweating.

As keratin is a fibrous protein, the topmost layer of skin which is the epidermis acts a barrier which protects from stress and damage. It is rigid and elastic holding the various layers beneath the epidermis. From the skin the person’s age and their health status can be determined.

Epidermis is not a mechanical barrier, but also protects from radiation, chemicals, pathogens and others. Due to the plasma membrane’s inner surface hydrophobicity, it acts as a water barrier. Structure and support to the epidermis is provided by the proteins which are cross-linked.

The generation of lamella granules which contain phospholipids, ceramides and glycosphingolipids in stratum spinosum transports them to intracellular location via exocytosis.

The secretion of these granules forms a lipid rich membrane which inhibits water movement but antimicrobial activity is possessed by fatty acids and defensins like chemicals are also liberated by these lamella granules.

The structure of the epidermis of plant is quite simple than that of animal. It comprises of guard cells, simple epidermal cells and hairs and is just a single cell in thickness. More than single layers are also seen in few plants like Nerium and Figus.

Cells are tabular shape in the stems epidermis which are tightly glued to other cells with very little voids in between. Epidermis is found in the roots, stems, leaves, flowers and all the parts of the plant.

Plants posses cuticle which is a wax coating and is thus water resistant and present above the ground level. Cuticle functions as a protective barrier by keeping the water within it and microbes out.

Another coating is the epicuticular wax which acts as a barrier to plant by protecting from wind, excess sunlight and loss of water. Plants have evolved to stay in humid environment. Cuticles are transparent so that light can pass. As epidermis is colorless, they have chloroplast which can carry out photosynthesis.

The exchange of gases takes place through stomata, which are found in the epidermis leaves. The stomata comprises of guard cells which have the pores and chloroplast and can synthesize their own food.

In trichomes, which safeguards the plant from insects as well epidermis extensions are found. The plant protection is done by liberating toxic compounds or by releasing thorns, spikes or spines.

In such a condition if a plant is attacked by huamns or animals it will irritate their skin due to histamines. Trichomes generates sticky nectar which is sort of distraction made by plants so that insects can come and get digested by plants.

The water movement in roots is facilitated by roots in the plants, as it possess a cuticle which is extremely thin. Mucigel is a chemical which is produced by roots, so that they can translocate in the soil.

In animals, keratin is found in various forms in hair, skin, nails, claws, scales, hooves, feathers and horns. These are the adaptations of the dermis, subcutaneous and epidermis. Antlers, although comprises of bones but possess coating of epidermis.

As keratin is dead, horns, hooves, claws and nails are rigid and firm which provides the strength. As keratin is a complex structure it has various properties like tolerating forces, attacks and impact resistance. 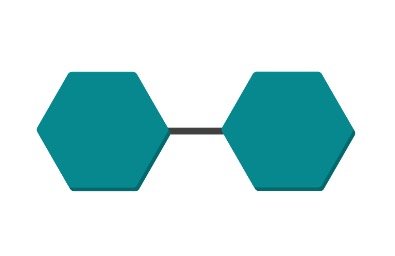