The word glucose originates from a Greek word, which means sweetness and was given by Jean Baptiste Dumas in 1838. Its chemical formula is C6H12O6 and are carbohydrates to be precise are monosaccharide and can be easily broken, thus called simple sugars, however can fuse with other molecules through glycosidic bonds to form sugar molecules. Fructose and galactose are also monosaccharide.

Glucose is an organic molecule, with hexose sugar. The weight of glucose is 180.156g/mol and its chemical formula is C6H12O6. It dissolves in water, palatable and is in solid crystal form. The glucose heating capacity is 218.6 J and 146℃ is the glucose melting point.

Glucose vs Galactose vs Fructose

All these 3 sugar moieties are monosaccharide; however, the most important monosaccharide is the glucose, which are 6C sugar molecules. Fructose is a ketose sugar whereas, galactose and glucose are aldose sugar and quite resemble in structure, however can be differentiated on the basis of the hydroxyl group at 4th position and galactose has a higher melting point whereas fructose has lowest melting point and is the sweetest of all three.

Most of the animals prefer glucose as it can be easily broken and digested by them. Galactose gets metabolized by entering glycolysis, where it is phosphorylated by galactokinase and then transforms into glucose -6-P04 and similar breakdown of fructose occurs by glycolysis, which takes place in the liver.

There are two variants of glucose D and L form, which are so called due to Fischer projection. D means dextro where stereomers moves in clock wise direction and in laevo form they rotate anti-clock wise and is a synthetic form, whereas the most abundant is the D-form.

Glucose was extracted from raisins by Andrea Marggraf, who is considered the pioneer of analytical chemistry and termed the molecule as “eine Art Zucker” which was renamed as glucose by Jean Baptiste in 1838, the structure of glucose was given by Emil Fischer in between the year 1852-1919 and was awarded for the structure as well as stereochemistry. Glycolysis was identified by Otto Fritz Meyerhof around 1884-1951.

Glucose involving reactions are as follows:

Through the process of photosynthesis, autotrophs make food using CO2, sunlight, water, salts and the pigments such as chlorophyll and other pigments and results in the formation of glucose and oxygen.

Saccharification is the process where complex molecules are disintegrated into smaller molecules, which requires various enzymes or their action to carry out this process.

For example, salivary amylase in the mouth degrades complex sugar into easier breakable sugar, which is further continued in small intestine by lactase, maltase, sucrase which disintegrate complex disaccharide into monosaccharide. Terminal glucose removal from the chain of sugars is done by the enzyme glucosidases.

The epithelial cells of the small intestine absorb the glucose, which further moves from the lumen to sodium glucose system, where through facilitated diffusion glucose enters the blood and will move into capillaries.

To captivate the glucose, they are phosphorylated so that they don’t leave the cell and thus various pathways involve glucose-6-PO4, such as glycolysis, pentose phosphate pathway, glycogenesis and others.

This process take place where glucose is converted to pyruvate and energy is released. During this process, NADH is also formed and pyruvate is transformed to organic compound in aerobic conditions and takes place in mitochondria.

Electron transport chain take place and through chemiosmosis ATP is obtained and respiration is a three-stage process. The amount of ATP obtained through glycolysis is two and 34 through oxidative phosphorylation, thus the net ATP is 36. In anaerobic conditions 2 ATP is formed through a single glucose molecule.

From molecules such as lactate, pyruvate, amino acid and glycerol, the non-carbohydrate molecules, glucose is produced. It is the reverse of glycolysis. The process starts in the mitochondria and completes in the ER.

From the glucose-6-PO4, glucose is produced by phosphatases moves to the cytoplasm of ER. Gluconeogenesis takes place during fasting, strenuous exercising, and when on less carbohydrate. It takes place in humans, animals and all organisms.

From glucose, production of glycogen for reserves is known as glycogenesis, which occurs in muscle and liver due to excessive amount of glucose in the blood. By glucokinase, glucose gets phosphorylated to glucose-6-PO4, thus getting captivated in the cell and through hexokinase can be phosphorylated as well.

These small sugar molecules are converted to long sugar molecule, which can be kept within the cell. this process is bidirectional and depending on the body need it can be changed. The reverse is known as glycogenolysis, where glycogen is disintegrated to form glucose in liver.

From the glycogen chain, single glucose molecule is cleaved and forms glucose-1-PO4 and gets converted to glucose-6-Po4 which will move to glycolysis. Starch degradation is the disintegration of complex starch molecule.

Within the cytosol, NADPH and five carbon sugar is produced, which will synthesize DNA, RNA and NADPH which will be used in fatty acid and steroid synthesis. It takes place in liver, red blood cell, ovaries, mammary glands in animals and in plants it helps to obtain carbon dioxide through this pathway.

Addition to the lipid, protein a glucose moiety is called as glycosylation, which helps in adequate functioning. Addition of a sugar molecule to proteins or lipid without using an enzyme is called as non-enzymatic glycosylation.

a) Insulin: It is a hormone which is required in blood when sugar levels are at peak, which attaches to the receptor on the surface of the cell, which releases GluTs, which are in the cytoplasmic vesicles lies intracellular and they combine with plasma membrane and enter inside. 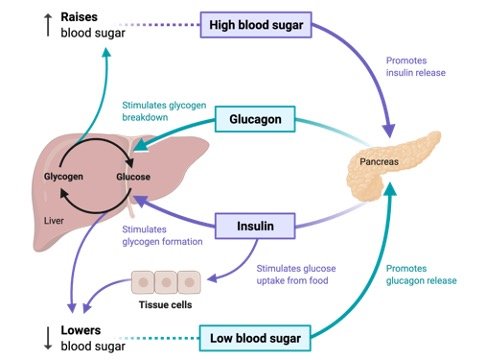 After their work is completed they are removed and again put back into vesicles lying intracellularly. However, brain cells and liver do not require insulin a they are insulin-independent.

Thus, glucose is taken directly by the brain and does not require to send stimuli, however muscle are not able to do this, thus require insulin and in low sugar levels will obtain energy from fats or other energy sources.

Although liver cell does not require insulin, but it does have an impact on liver. The enzyme hexokinase will be triggered and will form glucose-6-PO4 thus, trapping it within the cell, the enzyme triggering is the function of insulin and triggers other enzymes as well like glycogen synthase, phosphofructokinase and others. Thus, glucose is converted to glycogen in liver by glycogenesis by insulin.

b) Glucagon: It is a hormone which is released into blood by pancreas when sugar levels are low, which will elevate sugar level, by triggering the enzyme in gluconeogenesis and glycogenolysis. Thus, from glycogen glucose will be produced. The triglycerides will also be broken to serve as an energy source.

Glucose metabolic disorders are due the lack of the enzymes or the intermediary compounds, resulting in impairment of various pathways like, gluconeogenesis, glycolysis, pentose pathway and etc. for example absence of glucose-6-PO4 isomerase is absent, thus the conversion of this fructose-6-PO4 is not possible in the cytosol, which is because of the defects on the chromosome 19 gene in humans.

Another example is the absence of the enzyme pyruvate kinase, this enzyme is involved in the last step of the glycolysis where pyruvate is formed once it gets phosphate group from phosphoenolpyruvate to ADP, which results in ATP formation. This absence of pyruvate kinase is due to PKLR gene mutation.

There are various examples such as: Glucokinase absence can result in hypoglycemia due to excess of insulin and this defect is in the beta pancreatic cells, in which there lies a defective GCK gene.

Another disorder caused by the beta pancreatic cells, in which there lies a defective GCK gene is the type 2 mature diabetes which is due to absence of glucokinase and from hyperinsulinemia results in hyperglycemia. In the red blood cell is the impaired GPI gene which causes hemolytic anemia due to glucose-6-PO4 isomerase is absent.

Absence of the enzyme phosphofructokinase of glycolysis results in an impaired PFKM muscle gene and PFKL liver gene, resulting in glycogen storage type 7 disease. Fructose biphosphates’ deficiency, results in Baker Winegrad disease which is caused due to impairment in the FBP1liver gene.

This enzyme plays a gluconeogenesis. In the liver and RBC, there is an impairment in the PKLR gene, due to the absence of pyruvate kinase. Impairment in the red blood cell containing ENO 1 gene, resulting in an enolase deficiency in glycolysis.

Myopathy is caused due to absence of phosphoglycerate mutase which is due to impairment of the gene PGAM 2 in muscle. Another deficiency is the triosephosphate isomerase where there is impairment in red blood cells containing TPI 1 gene.

The out- put of photosynthesis is glucose in plants, which are stored in the starch form. It is an important part of cellulose and amylopectin. Thus, it is found in fruits, juices, plants and other organism.

Glucose is a vital molecule in various pathways, and is a major energy reserves which can take place in absence as well as presence of oxygen, during fermentation as well as during respiration. These in animals are called as blood sugar molecules and are transported to various organs.

In the form of glycogen, excess glucose is stored in muscles and liver. However, brains requires glucose to function properly, or it could lead to impairments. Thus, glucose is the preferred choice of all the body parts which has 4calories/gram, which means 100-gram glucose will result in 400 calories, thus excessive can lead to obesity, hyperglycemia, glucosuria and diabetes mellitus.

Glucose also forms structure or the covering of various organism, such as in cellulose and chitin. For DNA and RNA synthesis, glucose is used by pentose phosphate pathway.

Glucose can be degraded to form lipid. Ascorbic acid can be produced from glucose as it is raw material. In disaccharide such as lactose, sucrose and maltose as well it is a very important component. 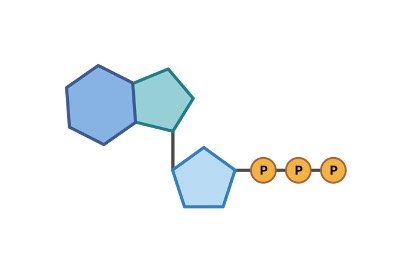